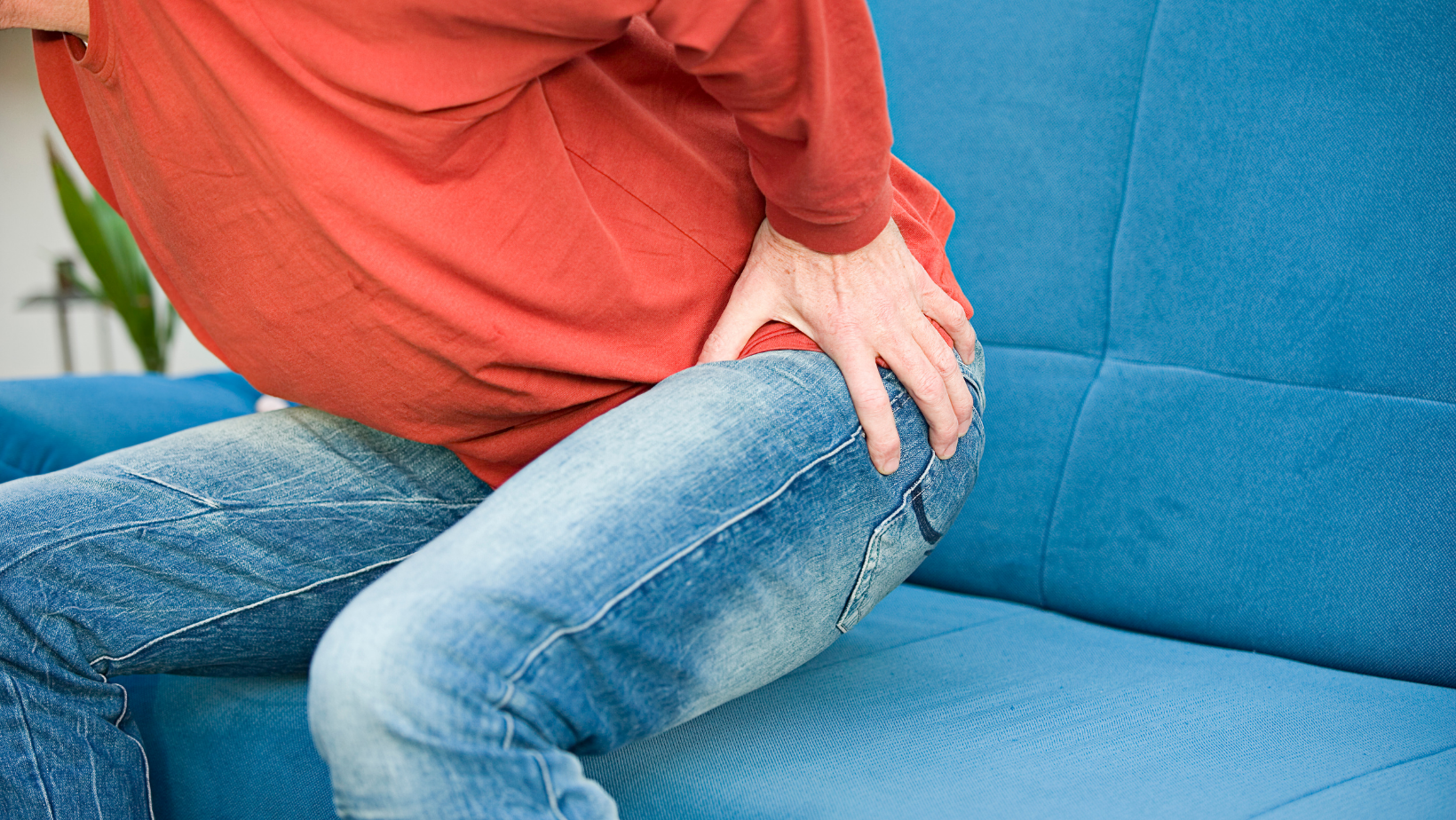 Bursae are found throughout the body and serve as cushions, lubricants, and shock absorbers around the shoulder, elbow, hip, knee, and heel. Bursae or bursal sacs are filled with synovial fluid (a clear, slippery substance) that allow structures such as ligaments, tendons, and muscles to glide over bone and one another by reducing the amount of friction between them. Bursitis is the term doctors use to describe a bursa when it has become inflamed and swollen. A leading cause of hip pain in adults is from greater trochanteric bursitis.

The greater trochanter is a prominent portion of the femur where strong hip abductor muscles attach (Fig. 1). There are several other bursae located near the greater trochanter bursa, which can be attributed to the number of muscle attachments and the gliding movement at the hip joint. Greater trochanteric bursitis occurs when the bursa that lies between the iliotibial tract (dense fibrous connective tissue on the outside of the hip that connects to the knee) and the greater trochanter (the bony prominence at the top of the thighbone) becomes irritated and inflamed. 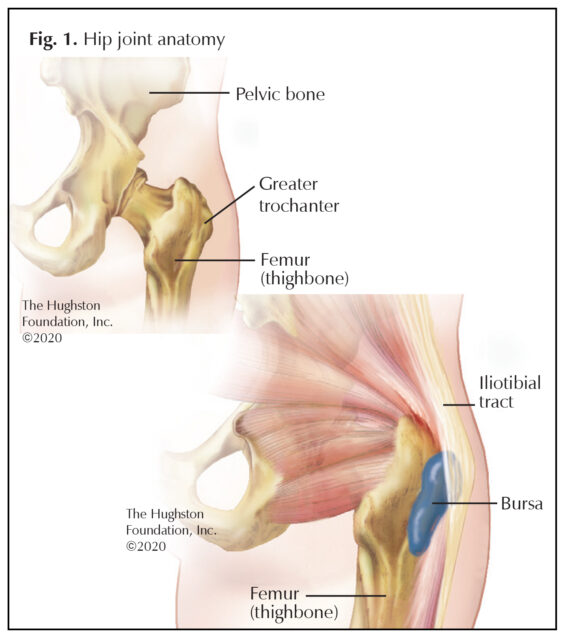 What are the signs and symptoms?

Patients who have greater trochanteric bursitis often describe the pain as tender to the touch on the outside, prominent part of the femur. The pain becomes worse after lying on the affected side during sleep and can cause a dull ache that hurts while walking. Often, the pain starts as sharp and intense in the early stages and then later becomes dull and achy and spreads out over the hip and thigh. Pain can occur during repetitive motion, such as walking or stair climbing, and you may experience a sharp pain when you get up from a chair or get out of a car after sitting a while.

Certain populations can be more at risk of greater trochanteric bursitis. For example, it is predominant in females between 40 to 60 years of age and in runners. Researchers believe this may be because females have a larger pelvic diameter, which can contribute to a greater prominence of the greater trochanter. In runners, the repetitive friction over the bursa from the iliotibial band (IT Band) causes local irritation and inflammation. Additionally, individuals with a higher body mass index (BMI) score are more at risk of having greater trochanteric bursitis.

More often, a change in your walking pattern or an injury to your hip increases the pressure and friction near the greater trochanter resulting in bursitis. Previous surgery or a hip implant can affect your gait as well. Additionally, bone spurs, arthritis, spine disease, and gout can cause the bursa to become inflamed and lead to the development of bursitis.

When should I seek medical attention?

You should see an orthopaedist if you have sharp pain on the outside of the hip or pain that radiates at night through your thigh. In addition to a thorough health history, your physician will need to know if you have fallen, or if you have been diagnosed with rheumatoid arthritis, gout, or spine disease, as well as any other symptoms you are experiencing. Your doctor will perform a physical exam, and may order additional tests, such as an x-ray or MRI (magnetic resonance imaging). During the exam your doctor may put pressure on your hip and touch the area of tenderness that is causing your pain.

Is there an effective treatment?

The vast majority of patients improve with nonsurgical management. Nonsteroidal anti-inflammatory drugs (NSAIDs), such as ibuprofen can help with the pain and swelling. Other modalities include activity modification, avoiding activity that irritates the bursa, and physical therapy to stretch and strengthen the hip abductor muscles (Figs 2 & 3). A physical therapy program can address the range of motion and strength deficits that underlie gait deviations. First, neutral positioning of the lumbar spine and pelvis must be achieved. Then, range of motion and stretching activities are introduced to gain full extension, adduction, and rotation of the hip joint. Strengthening exercises for the stabilizing muscles of the lumbar spine and pelvis, as well as the gluteal muscles, are incorporated into the physical therapy program. The primary goal of physical therapy is to increase the patient’s ability to perform desired activities with less pain. 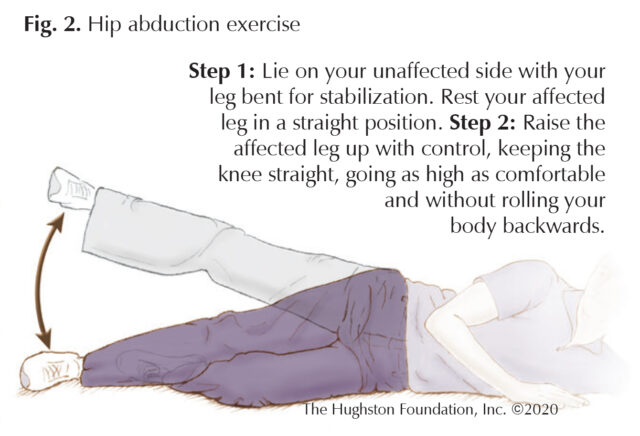 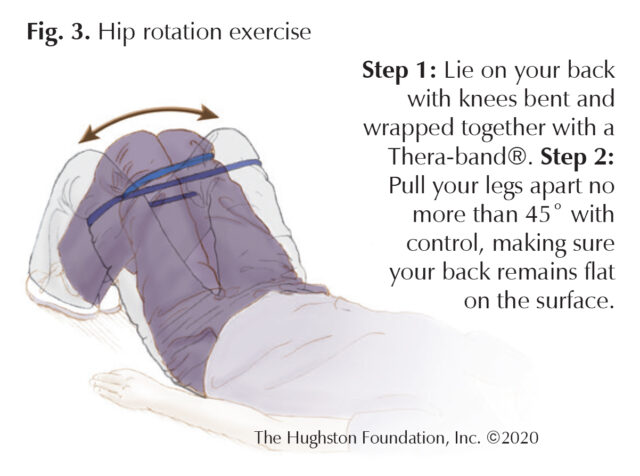 Your orthopaedist can also administer a corticosteroid injection into the bursa that can help reduce the inflammation. Rarely is surgery necessary for greater trochanteric bursitis; however, if all conservative measures fail, surgery can be required. If so, the offending bursal tissue can be removed through an incision on the outside of the hip in a procedure called open bursectomy. By contrast, endoscopic hip bursectomy—inserting a camera through a small incision into the hip area and removing the bursa through another small incision—has an outcome comparable to that of open bursectomy, but with the advantages that it is less invasive and can be performed as an outpatient procedure (Fig. 4). 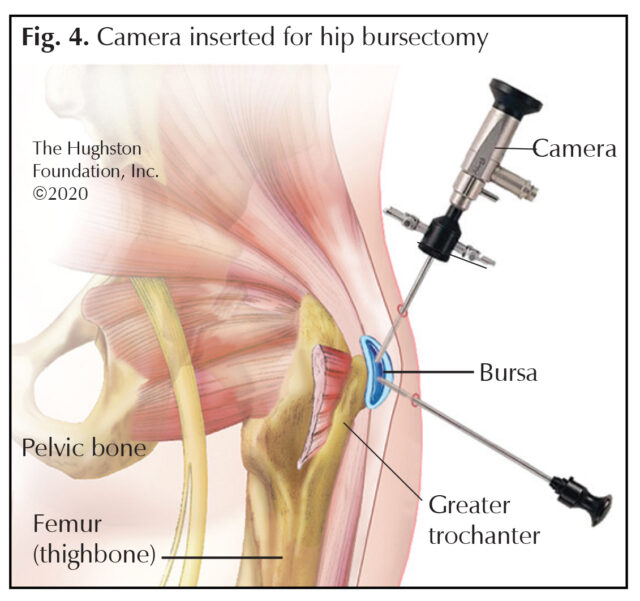 Can I prevent this from happening?

Rest, stretching, and anti-inflammatory medications often help relieve the pain caused by greater trochanteric bursitis. To keep the inflammation from recurring, avoid repetitive activities that cause irritation of the bursa, such as running and jumping. You can also avoid stress on the hip by losing weight and performing physical therapy exercises that stretch and strengthen your hip abductor muscles. If you have a leg-length discrepancy, proper shoes can lift the leg and level the pelvis, which reduces the friction on the bursa as well. It is better to seek medical attention early to effectively use conservative methods of treatment and hopefully avoid surgery.